What Does Independence Really Mean?

Here we are, a holiday weekend that celebrates what we have cherished as “Independence Day.” I muse on that word “independence” because it has all kinds of connotations! So again, let’s go to Webster and check a few things out about ‘independence: “The quality or state of being independent” – a noun.

OK, that’s pretty simple, but let’s ask the obvious question, “what does being independent mean?” One thing that comes quickly to my mind was when I left home and was all excited about “being independent” from my parents. I love my parents, but I was ready for that “free feeling of breaking out on my own.” Of course, mom sent me money every month with a stern warning NOT to use that at the local tap where we college kids liked to congregate!—so much for independence!

To be independent means to NOT be dependent on something else, and in our Constitution that something else was NOT depending on England! Instead, the founding fathers created a new union free of the English monarchy’s rules, laws, and forced Anglican religion.

In 2020, a Gallup Poll was taken in every U.S. state asking what it means to be independent in America. The poll was part of the push-back on having to wear masks and the outbreaks of denial about the pandemic itself. Here are some of the top responses:

Notice in these quotes (and you can find many more) where we are reminded that our freedom and independence works only if we are united, and live as all people are equal, and if we don’t, we become divided and we fall. Wow—what does this mean to some of those responses about “my personal rights?” Here’s something from the Declaration of Independence about individual rights: “Individual rights are the rights needed by each individual to pursue their lives and goals without interference from other individuals or the government. The rights to life, liberty, and the pursuit of happiness as stated in the United States Declaration of Independence are typical examples of individual rights.”

Looking at just these small snippets of our Declaration of Independence, the definition of independence, and the freedoms we cherish, tells us that “we are IN THIS TOGETHER” because any other way will not work and the freedoms we cherish will be gone. As a person of faith, we can look to the many words of Jesus who constantly called his people to be united, in unity, in community – together!

This year after a long season of a pandemic that sadly continues, we can look back and see horrible insurrection on our Constitution on January 6, people killing one another over having to wear a mask, violent speech and vandalism, destruction of temples, mosques and degradation of those with faith, plus a simmering anger that lingers and continues to divide us. I do not think this is what was intended by the writers of the Declaration of Independence and our precious Constitution!

So here is my response on this Independence Day: To me, freedom first comes from God, the next freedom we have is in our country and both have come at a great cost, meaning I don’t get personal rights, instead I get a community of freedom-loving people who are willing to care for one another and protect this gift of freedom in the USA. This year I want to embrace the Preamble and let it sink in deeply, it is not I the people it is “WE the people” and together we can begin the healing that is so badly needed in America. 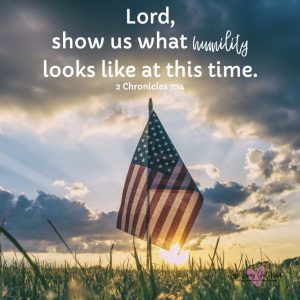 I hope you’ll join me in this! Let’s set aside our anger, our politics, and most of all our self-righteousness, and remember what the Lord has told us we must do to heal our land:

Then if my people—who are called by my name,
will humble themselves,
if they will pray and seek me
and stop their evil ways,
I will hear them from heaven.
I will forgive their sin,
and I will heal their land.
—2 Chronicles 7:14 NCV